A long-delayed restoration of the Colosseum's only intact internal passageway has yielded ancient traces of red, black, green and blue frescoes ? as well as graffiti and drawings of phallic symbols ? indicating that the arena where gladiators fought was far more colorful than previously thought.

Officials unveiled the discoveries Friday and said the passageway ? between the second and third levels of the first century Colosseum ? would open to the public starting this summer, after the 80,000 euro restoration is completed. 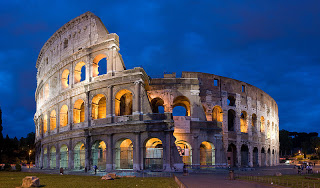 The frescoes were hidden under decades of calcified rock and grime, and were revealed during a cleaning and restoration project over the last two months. The traces confirmed that while the Colosseum today is a fairly monochrome gray travertine rock, red brick and moss-covered marble, in its day its interior halls were a rich and expensive Technicolor.


- $800-million Ancient Rome Theme Park Planned - In Rome
The wonders of the ancient city of Rome will be re-created as a gigantic theme park a few kilometres from the original monuments, if Gianni Alemanno, the mayor, has his way. The grandiose project is being nicknamed the Disneyland of Ancient Rome or Romaland....

- Snow Damages Colosseum, Medieval Churches In Italy
Heavy snow in recent weeks has already wreaked havoc across Europe -- now it is damaging some of the continent's most recognized historic monuments. The Colosseum in Rome has been forced to shut after small pieces of its walls crumbled away as a result...

- Unesco And Italy Agree To Cooperate On The Restoration Of Pompeii
UNESCO and Italy have agreed to collaborate on the restoration of the Archaeological Areas of Pompeii, Herculaneum and Torre Annunziata, inscribed on UNESCO?s World Heritage List in 1997. International attention turned to the World Heritage site in late...

- Underground Crusader City Revealed Beneath Streets Of Acre
Archaeologists prepare to uncover entire compound built in medieval times and hidden for centuries under the rubble in northern Israel. Off the track beaten by most Holy Land tourists lies one of the richest archaeological sites in a country full of them:...