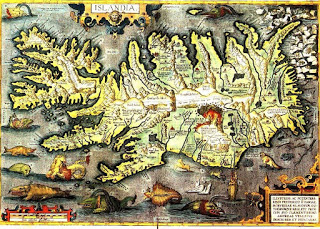 MP for the Independence Party Árni Johnsen arranged for the relocation of a 30-ton boulder, which he believes is home to three generations of elves, from Sandskeið on Hellisheiði in southwest Iceland to his home Höfðaból in the Westman Islands today.

Árni first encountered the elves? dwelling when he was in a serious car accident in January 2010. His car overturned and landed beside the boulder 40 meters away from the highway, Morgunblaðið reports. His SUV was damaged beyond repair but Árni escaped the accident unharmed.

He considered whether the boulder might be a dwelling for hidden people and had it saved from landing underneath the south Iceland Ring Road when the highway was widened.

Click here to read this article from Iceland Review Online

The Icelandic belief in elves goes back well over 1,000 years. Elves (álfar) are referenced many times in the Poetic Edda, but there is a tantalizing lack of descriptive information about these mysterious beings. Medieval sources record the practice known as álfablót ("sacrifice to the elves"), but again there is little detail to be found.


- Archaeologists To Excavate Alþingi Site In Iceland This Summer
While the site of the parliament in Reykjavík is being excavated, archeologists will continue to search for remains at the site where Alþingi, the Icelandic parliament, was founded in 930 AD, Þingvellir National Park, this summer.  This time around,...

- In Royal Absence: The Making Of An Icelandic Aristocracy, 1271?1387
As Iceland became part of the Norwegian kingship 1262?1264, a new power structure in the shape of an Icelandic aristocracy appointed by the king of Norway was established. This development is discussed in a doctoral thesis in History from the University...

- Medieval Scholar To Take One-year Trip To Explore Iceland?s Sagas
A Cambridge scholar is starting a one-year journey across Iceland, to examine the history and significance of Icelandic sagas. Dr Emily Lethbridge, who just completed her post-doctoral Research Fellowship at the University of Cambridge, will be driving...

- Ma In Icelandic Studies
The Faculty of Humanities at the University of Iceland would like to draw attention to the programme MA in Medieval Icelandic Studies. The deadline for applications is March 1st. For further information see the web-site http://www.hug.hi.is/page/ma_icel...