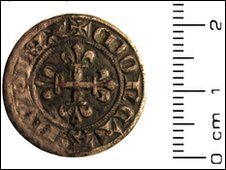 A woman in Shropshire, England is the first in the United Kingdom to be convicted of failing to report the discovery of a medieval coin dating back to 1322.

Kate Harding, 23, of The Hawthorns in Ludlow, presented a 14th century artefact to Ludlow Museum in January last year. After it was identified by experts from The British Museum she was told she had to report the find to the coroner.

But she did not and on Thursday admitted breaching the Treasure Act of 1996, which states that any object more than 300 years old and with metal content of at least 10 per cent must be reported. She was given a three month conditional discharge, ordered to hand over the artefact and to pay £25 in costs.

Dr Michael Lewis of the British Museum confirmed the case was the first to have resulted in prosecution. He said: "This is a landmark case and it sends a clear message to those who fail to report Treasure. However, we are delighted that the artefact, which has great historical significance, has now been handed over under the instruction of the magistrates."

Ms Harding came across the coin, which marks Charles IV?s ascension to the French throne in 1322 and is said to be worth £2,000, buried in the ground at her family home in Tenbury Wells, Worcestershire, when she was nine years old.

She kept it as a memento after her mother?s death and showed it to experts at Ludlow Museum in Shropshire for the first time last year. To add to the confusion, she also told the Finds Liaison Officer that she found the coin within the last year.

But she ignored their advice to hand in the half-ounce object, called a piedfort, which historians believe may have been used as a type of counter or guide to mint workers for producing more coins. Museum staff contacted South Shropshire coroner Anthony Sibcy, who in turn got in touch with West Mercia Police. Ms Harding was taken to court after claiming in a police interview that she had lost it.

A similar item was discovered in West Clandon, Surrey in 2007, and bought by the British Museum for £1,800. But Ms Harding may not receive anything, as the Treasure Valuation Committee has the power to cut or cancel any payment for "wrongdoing".

Under the 1996 Treasure Act, anyone finding an ancient artefact must report the find to the coroner within 14 days. Ms Harding faced a possible sentence of three months in jail.

Mr Edwards, prosecuting, said: ?When asked why she had not reported the find she said ?I don?t know, I just had enough going on at the time.?

Brendan Reedy, defending, said the piedfort was believed to be of no significant financial value and instead had ?sentimental value? to Ms Harding. ?We are not talking about something here that is worth anything that is quite important,? he said. ?I don?t think there are going to be queues around the block of people to see it.?

- Medieval ?treasure? Found Near Ripon
An intricately-carved medieval ring discovered near Ripon is an important archaeological find which qualifies as ?treasure?, a coroner has ruled. The piece was found by metal detectorist Lindsey Holland close to Ripon on May 16, 2010 and sent to the British...

- More Archaeological Finds Being Report In Uk, British Museum Reports
Over 90 000 archaeological finds were reported to British authorities in 2010, the British Museum reports, which marks a significant increase over previous years. The growth has been credited to the efforts to make it easier to report finds to the Portable...

- Medieval Coins Found In Shropshire
Medieval coins discovered in Baschurch and in the Oswestry area have been declared as treasure trove by an inquest. At last week's Wem inquest, north and mid Shropshire Coroner, Mr John Ellery, declared the finds as treasure trove and they could now...

- Treasure Hunter Finds Ancient Coins
A hoard of medieval silver coins has been found buried in ground at Wellow, it was revealed this week. The 16 silver pennies were found by an amateur treasure- hunter, using a metal detector, and are being examined by experts at the British Museum. ...