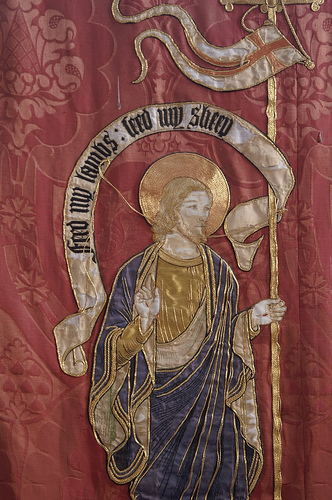 The chancel of the glorious church at Great Haseley in Oxfordshire has an 'English altar'. You know the sort of arrangement I mean, one that is enclosed on three sides with curtains, the side curtains hung between 'riddel' posts supporting figures of angels. It is rather a fine arrangement all told. 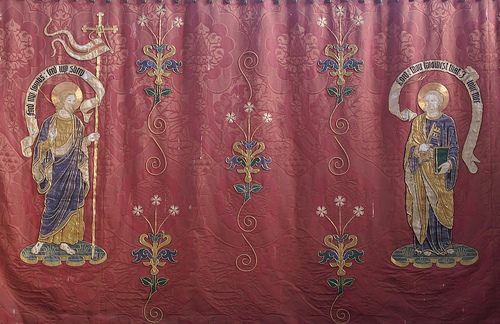 The dorsal curtain is decorated with some sublime embroidery, including a figure of the resurrected Christ (above) and a figure of St Peter, the patron of the church (below). Between them and around them are stylised daisies executed in silk and laid gold work. The background material of the dorsal is Comper's 'Van der Weyden' damask in the famous shade that has become known as 'Comper Rose' or 'Comper Pink'. The quality of the design and embroidery is particularly high, the figures are medieval in derivation but not slavish and the embroidery is very similar to much of the high quality work that the Sisters of Bethany produced for Sir Ninian Comper. The question is, is this in fact a long lost Comper commission? It is not mentioned in any of the literature, including the gazeteer of Symondson and Bucknall's recent volume on the designer. It is possible that it is the work of one of the other extremely competent early twentieth century Gothicists, such as F E Howard or perhaps Christopher Webb, who was responsible for a rather fine window in the church. Who knows. I would be very grateful if anybody can shed any light on it. 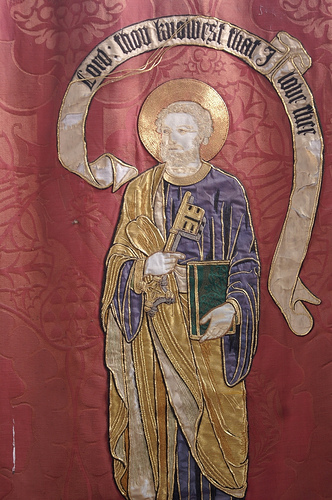 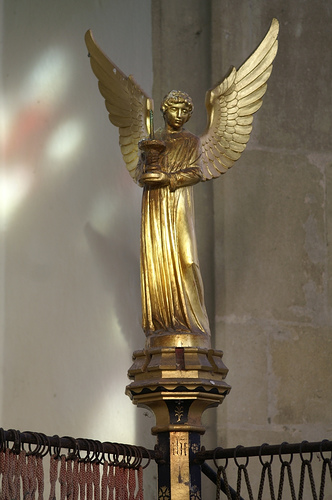 One of the angels on the riddel posts.

Here's the context of the altar, the vast early fourteenth century chancel: 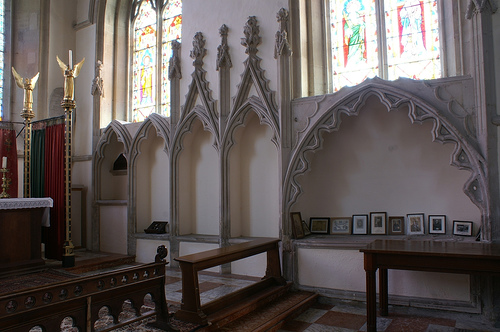 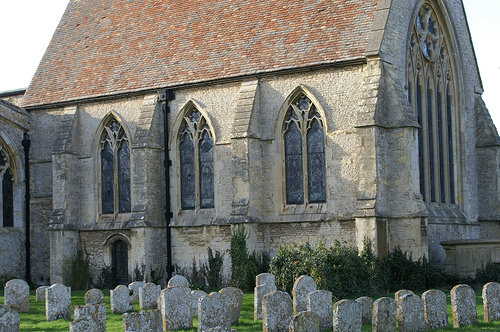 
- Comper Glass From Burgh -le-marsh
Manby, Lincolnshire, originally uploaded by Vitrearum. Manby church is only a minute or two along the road for me and for some reason I have always put off paying the church a visit, I think I always imagined it would be locked. I had noted some time...

- South Elkington
South Elkington, Lincolnshire, originally uploaded by Vitrearum.I am very grateful to Fr Anthony Symondson for solving the puzzle of Bernard Smith (see comment on the previous post). If I had picked up my copy of his work on Sir Ninian Comper, the answer...

- The Origin Of Two Of Sir Ninian Comper's Textile Designs
The Gothic revival designer Sir Ninian Comper (1864-1960) was a master at creating richly decorated ecclesiastical furniture and interiors. Many of the elements in his design work, notably his textiles, were derived from medieval sources, mostly North...