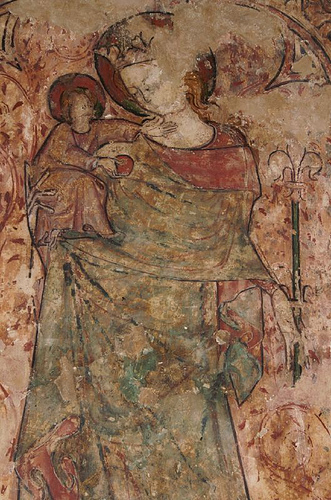 South Newington in north Oxfordshire has a superb array of medieval wallpaintings. There is a spectacular series in the north nave aisle dating from the early part of the fourteenth century and an early sixteenth century sequence on the walls of the nave clerestory. The earlier examples are really exceptional. Among them is is this portrayal of the Virgin and Child painted on the splay of one of the north windows. You will notice that Our Lady has the swaying s-shaped posture you would expect from an early fourteenth century piece and she holds a wonderfully playful figure of the Christ Child who is tugging at her hair. The Christ Child holds an apple, which is emblematic of the fact that the fall occurred because Eve took an apple from the Tree of Knowledge and that the incarnation of Christ undoes the effects of original sin. Our Lady is crowned and holds a sceptre topped with a fleur-de-lys, a stylised lily representing her purity. The whole composition is set within an architectural frame with a background of trailing foliage. With its reds, greens, purples and yellows, it would have been a striking and vibrant piece when first painted, but now it is sadly faded.


- Stiff Leaf, Bad Glass And Baroque Monuments.
There will be one or two new posts this week. I apologise that things have been a bit slow of late, I have the good excuse of moving house and settling into a new parish. I had a lovely little excursion last week into Nottinghamshire and one of the churches...

- Pre-reformation Devotional Images Of Our Lady
This glorious fragment of sculpture was discovered in 1879 walled up within Anwick church in Lincolnshire. It is a remarkable survival. It is a seated figure of the Virgin and Child, dating from the early years of the fourteenth century. Sadly it has...