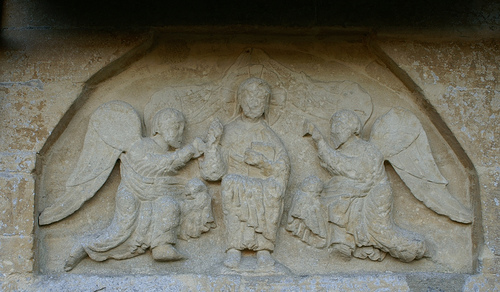 As a late medievalist, specialising in fifteenth and sixteenth century art and architecture, I can't claim to be any sort of expert on Norman door tympana. However, I do find them rather fascinating and have collected one of two photos of them on my Flickr stream over the course of the last couple of years. In terms of their decoration they seem to fall into three principle categories: 1. Directly religious iconography, 2. Folk iconography and traditional symbolism, which may or may not have Christian reference and 3. purely decorative forms.

The tympanum above, at Little Barrington in Gloucestershire, is twelfth century and fits in to category one. This is an eschatalogical image, which shows Christ sat in judgement, surrounded by angels. The end time is a great thing to be reminded of as you walk through the door to partake in the sacraments of the church.

Below you will find photos and descriptions of one or two more tympana, I hope you enjoy them. Most of the examples, like the Great Barrington tympanum, are twelfth century. As usual please click through to Flickr to get the full photograph

First of all Dinton in Buckinghamshire. This is a particularly wild example, containing lots of iconographical information. Two strange hybrid creatures with the head and front legs of a lion and a serpant's tail eat fruit from a tree. Below is the inscription: 'Praemia pro meritis si qis despet habenda Audiat hic preepta sibique sit retinenda', which can be translated as 'If anyone despairs of having rewards for his merits Let this man hear the advice and let it be retained by him.' Well that's as clear as mud eh. The imagery seems to allude to Adam and Eve's temptation and the fall? 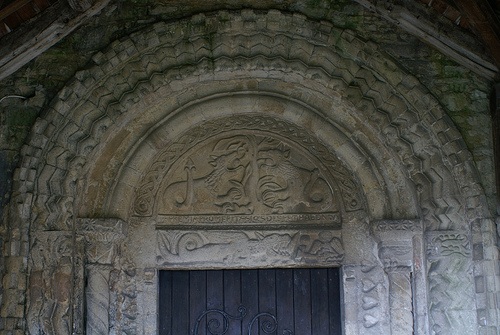 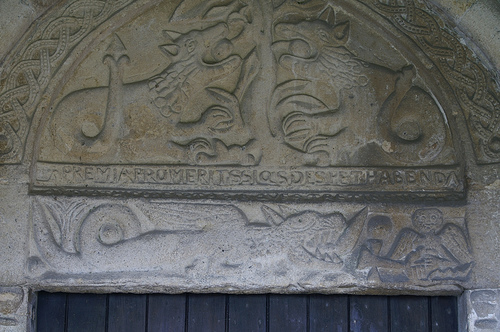 In this gloriously crude example at Kencot in Oxfordshire, we seem to be on safer iconographical ground. An image of Sagittarius, the usual centaur usefully labelled, shooting at a monster who seems pretty determined to devour him 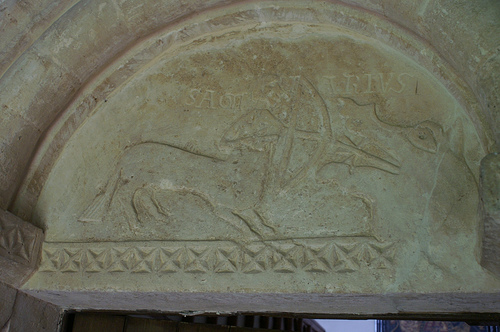 At Charney Bassett in Berkshire is example of classical imagery being imported into the decoration of a Christian building. This tympanum portrays Alexander being lifted up by winged beasts. 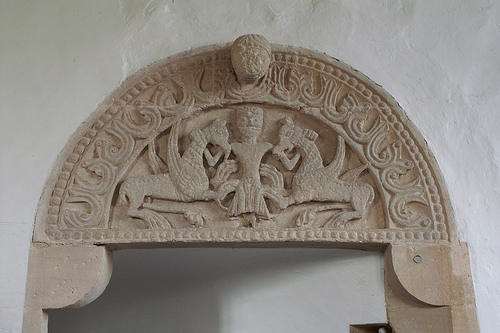 There is no figurative work on the tympanum at Haltham in Lincolnshire, just a central cross in a roundel surrounded by a rather random collection of decorative motifs, including some knotwork. 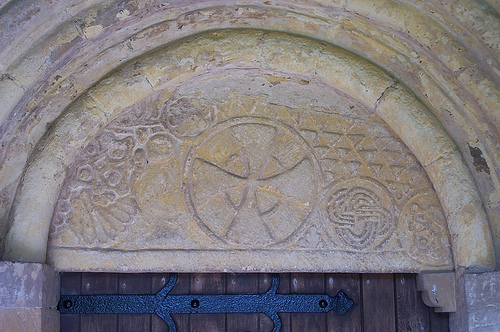 Lastly Great Rollright in Oxfordshire. A great one this, filled completely with rosettes and beaded stars, except for a little panel in one corner. In this panel is a fish that appears to be about to eat the head of a man and a corpse wrapped in a decorated shroud. Any ideas what these might mean if anything? 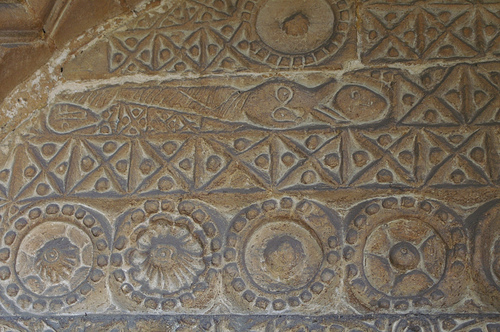 Further information. A quick search of Martin Beek and Tina_Manthorpe's photostreams will bring up a lot more examples of tympana:

You may also like to have a look at the website of the Corpus of Romanesque Sculpture, a British Academy research project which is attempting to catalogue the remaining body of Norman decorative stonework in England.

- Window Splays
Silchester, Hampshire, St. Mary's Church 15, originally uploaded by Eric Hardy. Browsing on friends photos on Flickr I came across this lovely image of the south side of the chancel at Silchester in Hampshire by Eric Hardy. The splays of the windows...

- Unfinished Work?
Turkdean, Gloucestershire, originally uploaded by Vitrearum.I came across this fascinating oddity at Turkdean in the Gloucestershire Cotswolds. When the parisioners decided to rebuild they modest two cell Norman church sometime in the fifteenth century....

- Marginalia - Images On The Edge Part I
Brocklesby, Lincolnshire, originally uploaded by Vitrearum.Yesterday, with the Revd Gordon Plumb as my guide, I went to the glorious estate church at Brocklesby in Lincolnshire. Brocklesby is a fascinating place. The estate is the property of the Earl...

- Elevation Squints In Screens
Church Hanborough, Oxfordshire, originally uploaded by Vitrearum.One of the things I sort of obsessively look for and photograph in churches are elevation squints. These little openings can often be seen cut into the dado of medieval screens and were...