In the late Middle Ages the fashionable material for altarpieces in England was alabaster, a type of gypsum, which could be found in limited quantity in parts of south Nottinghamshire, Derbyshire and Staffordshire and was very easily worked. By the early part of the fifteenth century Nottingham had become something of a centre for the production of alabaster panels for use in altarpieces. Generally speaking the panels were fairly small in scale and they were used in groups wired up into a gessoed wooden frames. Often the panels were highlighted with colour and gilding. The images generally followed two themes the Life of Our Lady and the Passion of Christ. As alabaster is a very friable material, often the panels are in quite poor condition, but quite a lot of them still remain. The example above, portraying the arrest of Christ, is from a series of panels in Drayton in Berkshire. I include some more photos of the Drayton sequence.

The Adoration of the Magi, this is an image that would have been termed 'Our Lady in Jesyn' in the Middle Ages, Our Lady in Bed. 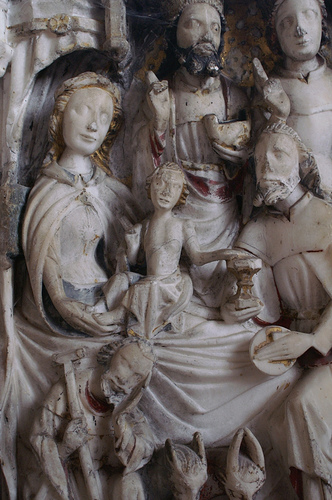 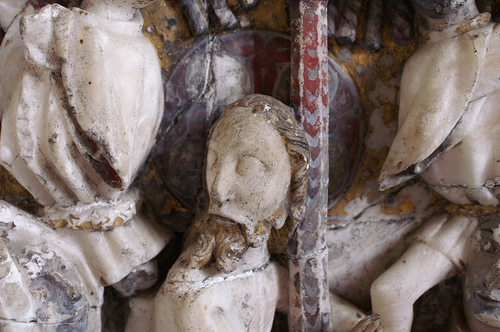 This link to the page on the Swansea altarpiece on the V and A website, gives some indication of the arrangement of a wooden cased alabaster altarpiece.

Further reading:
The definitive works on the subject at both by Francis Cheetham, expensive but gloriously illustrated.

F. Cheetham, English Medieval Alabasters: With a Catalogue of the Collection in the Victoria and Albert Museum (London, 2005).


- Four Arts Spotlights Rare English Medieval Alabasters In First Showing In U.s.
To fully understand the pale, carved representations of Christian stories populating The Society of the Four Arts? galleries, you have to step back in time about 600 years. In those days, they adorned church altars or were the focal points of shrines...

- Everything And More
Annunciation, 1400s.The meeting with Jim the geologist and Dan the chemist was terrific. This vivid (look at the breath of God!) alabaster Annunciation from the Philadelphia Museum of Art will help here. What is this profound thrill of newly gained knowledge?...

- So Excited
I can hardly sleep for how excited I am about tomorrow. It's not the student presentations on Jerusalem (although I'm sure those will be swell), and no, it's not the grading. Rather, I'm having lunch with two really nice colleagues, a...

- Masterpieces From The Christian Museum On View In St. Pölten
The Christian Museum of Esztergom is the largest ecclesiastical collection in Hungary, conserving European and Hungarian works of art from several centuries. Opened for the public in 1875, it became the third most significant picture gallery in Hungary,...

- A Defaced Medieval Reredos - Notgrove, Gloucestershire
The east wall behind the high altar of the tiny little estate church at Notgrove in Gloucestershire is generally covered with a large tapestry, which was made in 1954. If you pull it up, and there is a little pulley to help you, you reveal this: the...