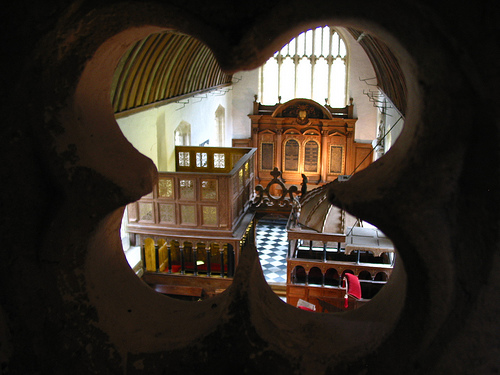 I may have drawn your attention to the excellent photography of my friend Martin Beek in some earlier posts, but can I mention his name again.  As well as an being an excellent and photographer with a great eye for detail, Martin is an artist of great breadth and accomplishment who works in a wide range of different media and there is a lot of interest on his Flickr pages.   I was recently drawn to a series of photos he's taken of Rycote Chapel in Oxfordshire. 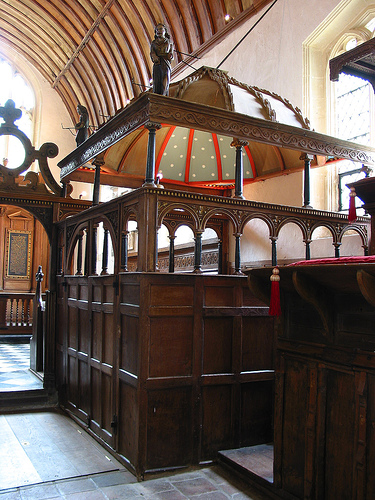 Rycote chapel was built in the late 1450s for Richard and Sybil Quatermayne, to serve a chantry college founded by them in 1449.  The fabric consisting of a west tower, a nave and chancel in one with a barrel ceiling, remains pretty much as they built it.  Inside the building are a series of extraodinary furnishings.  Medieval benches and stalls still remain in the chancel, but the rest of the furnishings are early seventeenth century and high church.  On either side of the rood screen, which is a remodelled medieval screen, are two vast family pews.  That on the north is the pew of the Norreys family, who were lord's of the manor.  Above it a musician's gallery.  The pew to the south, with it's ogee canopy painted like a night sky within, was apparently built for Charles I when he visited Rycote in 1625.  With four angels at the corners, it was once topped with an image of the Virgin Mary, an iconographical display that would have enraged any seventeenth century Puritan.  In the chancel is a reredos of 1610 and an altar surrounded by balustered rails of the later seventeenth century.  Rycote chapel is a glorious example of an Anglican high church interior from those decadent first decades of the seventeenth century and is rare to have survived unscathed. 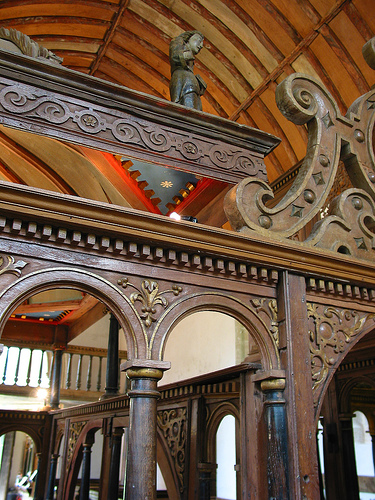 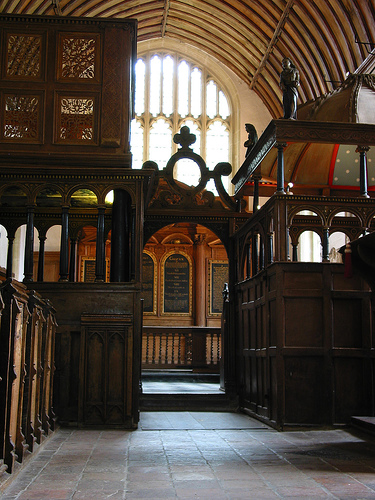 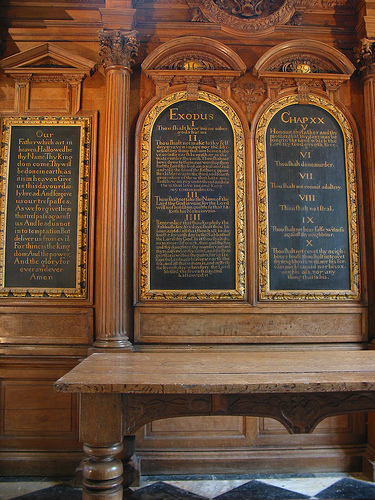 
- Aumbry Door
Many of our churches still retain the evidence of aumbries, the secure lockers that served as the repository for valuables before the invention of the safe.  They are a common feature let into the side walls beside both...

- Malvern Link
I'm grateful to a Facebook friend Julie Allsopp, who has recently taken the following photos of the once glorious conventual chapel of the Holy Name at Malvern Link in Worcestershire.  This chapel, dating from...

- How's This For A Bit Of Atmosphere
A fifteenth century Seven Sacrament font in Ham stone, sandstone recesses with thirteenth and fourteenth century effigies of the Ralegh family, a late medieval waggon roof, a patchwork of old flooring and a late seventeenth century tablet...

- Beware The Ides Of March
The Norman chancel arch at Glympton in Oxfordshire has the following interesting and tantalising inscription carved on its jamb: 'Dedicatio hujus templi Idus Martii' i.e. 'this temple was dedicated on the Ides (15th) of...