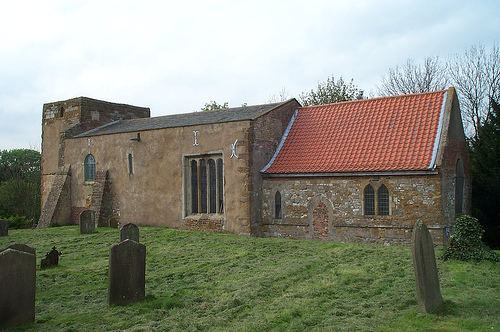 The wonderfully texture church at Barnetby in Lincolnshire has this funny stubby little tower. Surely it's been truncated. Down the road Redbourne church in the same county has the opposite problem, it has this wonderfully exaggerated tower, with apparently two stages of bell openings. Somethings a bit fishy!

Anyway it turns out that the upper stages at Redbourne were added to the tower in 1785 by the Duke of St Albans, in order that it appeared as a landmark in his park. It is believed that the masonry was in fact the missing upper stage of the tower at Barnetby. I hope the people of Barnetby got a good deal.

- Fire Damages Medieval Church In England
Fire crews were called to St Mary at the Elms church in Ipswich town centre at 8.30am on Saturday. Flames were seen billowing from the tower, which is thought to date from Tudor times and includes the oldest working clock in Ipswich. Firefighters were...

- A Mighty Norman Tower
Fingest, Buckinghamshire, originally uploaded by Vitrearum (Allan Barton).Fingest is a tiny village in the Chilterns in south Buckinghamshire. The village is dominated by the mighty Norman western tower of St Bartholomew's church. In fact the tower...

- Unfinished Work?
Turkdean, Gloucestershire, originally uploaded by Vitrearum.I came across this fascinating oddity at Turkdean in the Gloucestershire Cotswolds. When the parisioners decided to rebuild they modest two cell Norman church sometime in the fifteenth century....