﻿ 'In God is al godnes' - an inscribed font.
Medieval History

'In God is al godnes' - an inscribed font. 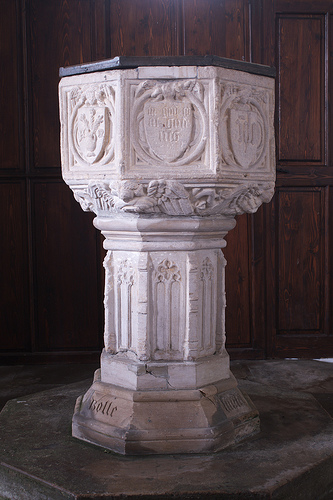 South Ormsby in the Lincolnshire Wolds has a fascinating Perpendicular font. The base of the font is inscribed with a patronal inscription, recording that it was given to the church by Ralph Bolle and his wife. The inscription reads 'Orate pro animabus Radulphi Bolle ... uxoris eius qui fieri fecerunt hoc baptisterium' . 'Pray for the soul of Ralph Bolle [and ? ] his wife who made this baptistry'. It is curious this use of the word 'baptisterium' rather than 'fons' in this context, I've not come across that before. The part of the inscription that records the name of Ralph's wife is sadly missing, and as a consequence we don't really know who Ralph Bolle is. More research work for me! He was probably a member of the family of the same name from Swineshead, who inherited the neighbouring manor of Haugh in the middle of the fifteenth century. 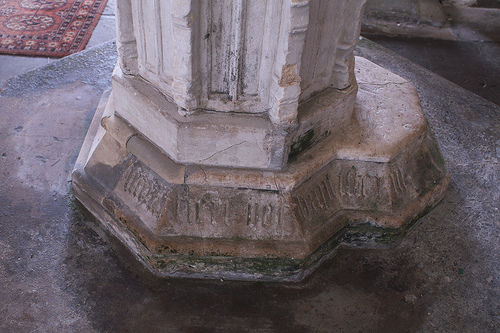 The stem of the font us decorated with fairly conventional traceried panelling. Around the base of the bowl are figures of angels with outstretched wings. The bowl of the font is again fairly conventional, decorated with figures of angels holding shields, Two are heraldic (and may provide evidence of patronage if I do the work!), others are charged with the sacred monogram 'IHS', the monogram of Our Lady as Queen of Heaven 'MR', the instruments of the Passion and the mongram of the Annunciation, i.e. a lily pot between the letters A and M. 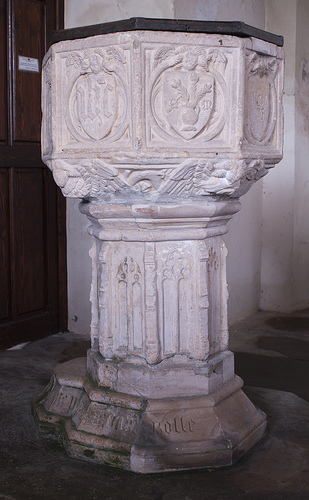 One of the shields is inscribed with a great rarity, a Middle English inscription: 'In God is al godnes' it reads. A very appropriate tag for an object through which so many have been brought to new life in Christ. 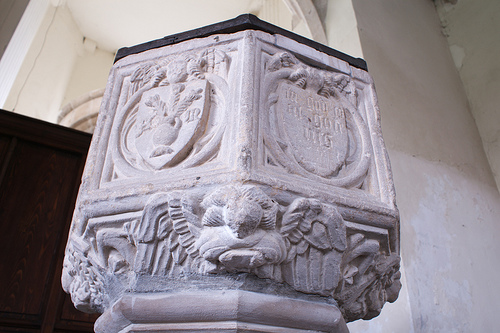 - Memorial Altarpiece
The parish church of Youlgreave in the Derbyshire peak district, has a rather remarkable and interesting medieval alabaster panel. This rectangular panel is currently set into the wall above the altar at the east end of the north nave aisle, though it...

- Carnations For Our Lady
South Muskham, Nottinghamshire, originally uploaded by Vitrearum (Allan Barton).As we enter May, the month of Our Lady, here are a group of late medieval quarries decorated with Gillyflowers or Carnations. Carnations were one of a myriad of flowers that...