﻿ It's amazing what you find under the floor.
Medieval History

It's amazing what you find under the floor.


According to John Throsby in his new addition of Thoroton's The Antiquities of Nottinghamshire, when the floor of the chancel at Mattersey church in Nottinghamshire was replaced in the 1790s they discovered two pieces of 'very ancient' sculpture under the old floor. These panels of sculpture are now attached to the chancel walls. 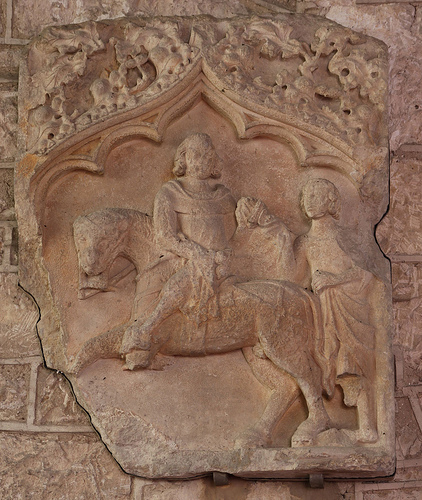 They are fourteenth century and very striking they are too. The first (left) shows St Martin of Tours on horseback dividing his cloak to give to the beggar, a fairly standard element of his iconography.  Throsby correctly identifies this.  The second shows two women standing and chatting to each other over a pile of drapery or earth that incorporates a cross broken in two.  Presumably this is the discovery, the 'invention' of the cross by St Helena.  Mattersey was the site of a small house of Gilbertine Canons, dedicated to St Helen and it has been suggested that the panels both came from there and were removed to the church at the dissolution.  This is quite possible, I suppose, but there is no evidence of course. Here's another bit of conjecture. Mattersey priory was burnt down at the end of the thirteenth century and rebuilt in the early fourteenth, might they panels have formed part of the refitting of the abbey church after the fire, were they altarpieces?   They are both of exceptional quality, the figure panels are set under canopies of cusped and crocketed ogees, the crockets blending into this exceptionally lush, deeply carved decorative oak foliage that that gives the Decorated style its name. 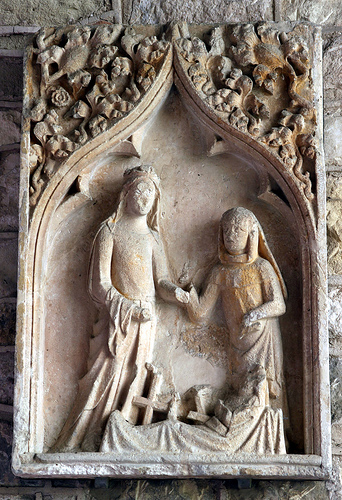 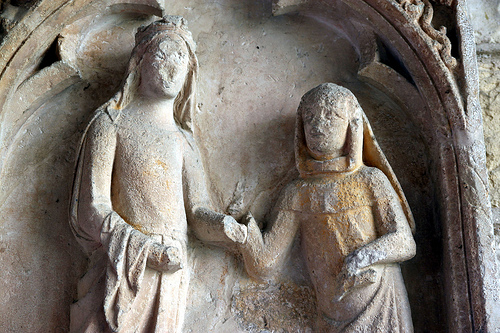 - Medieval Pavement
Medieval stone pavements in English chancels are something of a rarity.  In fact medieval chancel floors are a rarity, for many were destroyed either by post-Reformation burials, or swept away in the nineteenth century.  Under the...

- Beware The Ides Of March
The Norman chancel arch at Glympton in Oxfordshire has the following interesting and tantalising inscription carved on its jamb: 'Dedicatio hujus templi Idus Martii' i.e. 'this temple was dedicated on the Ides (15th) of...