Looking down (at medieval floors)


Quite often when we visit church buildings we are so busy looking up at the soaring architecture and the fine roofs, that we sometimes forget to look at the floors. 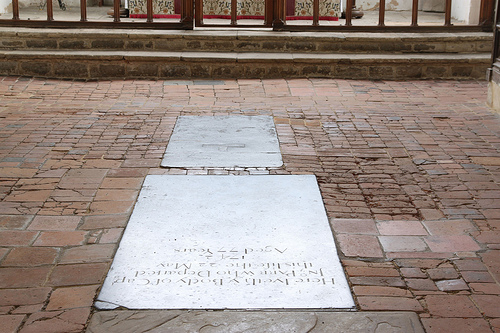 St Nicholas, Salthouse on the north Norfolk coast, has a floor that it well worthy of study as a considerable amount of it is late medieval.  The church was completed in 1503 with the internal division, rood and parclose screen added ten years later. 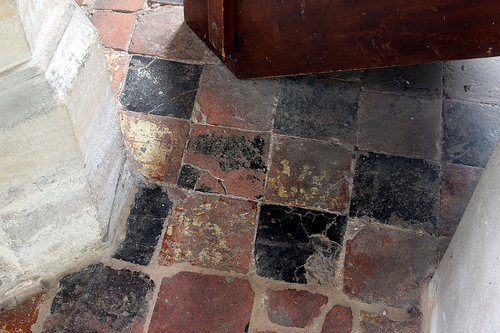 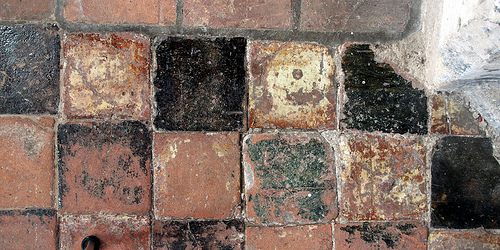 Rather than being tiled with the sort of patterned encaustics that were common in the thirteenth and fourteenth century; the sixteenth century tiles at Salthouse appear to have being laid in a simple chequerboard pattern, with a counterchange of black and yellow and in some cases green glazed tiles.   The floor is worn with many years use, but there are sufficient patches where the glaze still adheres particularly against the walls of the nave and in the north and south chancel chapels, to suggest that the whole eastern part of the church was tiled in this manner. Where the original tiles have become broken or have been disturbed for burial they have in some cases been replaced with brick.  That is certainly the case with the centre of the chancel. 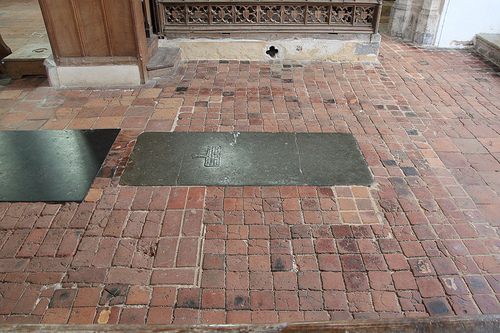 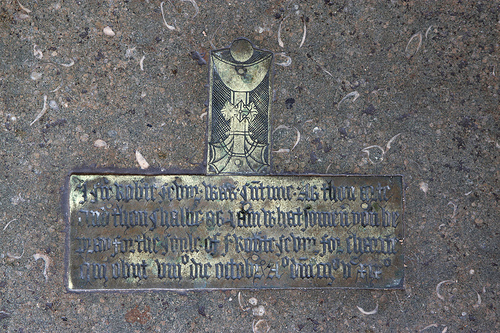 In the chancel between the stalls and forming part of the original floor there, is the chalice brass of rector Robert Fevyr who died in 1519.  The brass is let into slab of purbeck marble and there is a similar slab in the south chancel chapel.  With all the red encaustic around them, these purbeck slabs rather stick out, but when originally laid amid the black and yellow tiling would have blended in rather well. 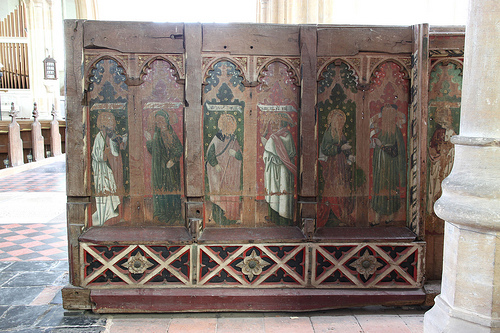 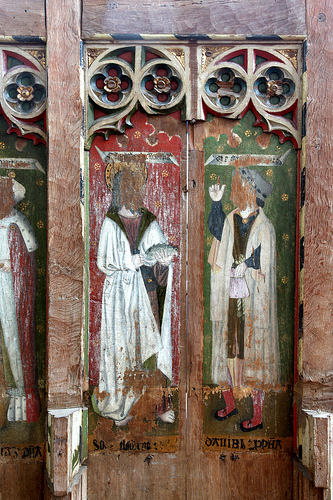 Salthouse also retains the dadoes of the rood and parclose screens, all vibrantly coloured.   The figurative work of the screen are backed with a ground of counterchanged red and green, a counterchange that is also continued onto the stencilled backs of the parclose screens. 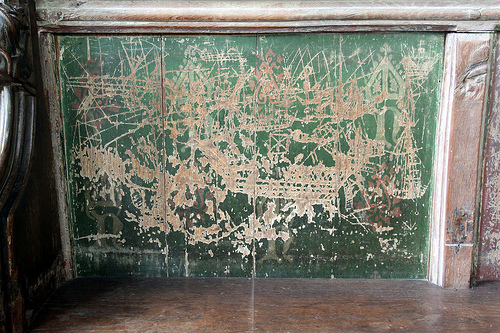 The visual effect of all this paint work, with the counterchanged tiling, and the textiles and hangings and sculpture that must have adorned the sanctuary and high altar, would have been really rather vibrant, something in appearance to the manuscript illustration below.  They were certainly not afraid of colour. 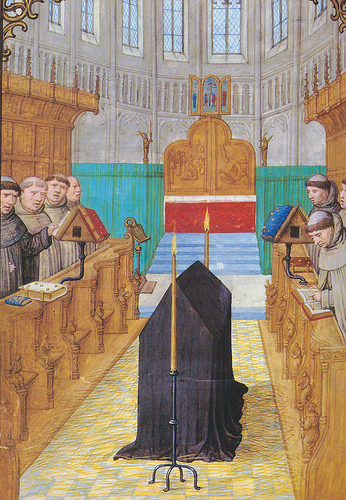 
- Briefly Noted -- Accessus: A Journal Of Premodern Literature And New Media
Readers of Modern Medieval will want to go take a look at the inaugural issue of Accessus, a publication of the Gower Project. This excellent-looking first issue includes the following essays that bring together disability studies, medieval studies, manuscript...

- Sanctuary Fittings And Something Rare
As well as the original pavement the chancel of Laxton church in Nottingham is lucky enough to still retain its stone sanctuary furnishings, fourteenth century piscina with double drains, Easter sepulchre, sedilia and image corbels. ...

- It's Amazing What You Find Under The Floor.
According to John Throsby in his new addition of Thoroton's The Antiquities of Nottinghamshire, when the floor of the chancel at Mattersey church in Nottinghamshire was replaced in the 1790s they discovered two pieces of 'very ancient'...