The fur Almuce - a long forgotten bit of choir dress 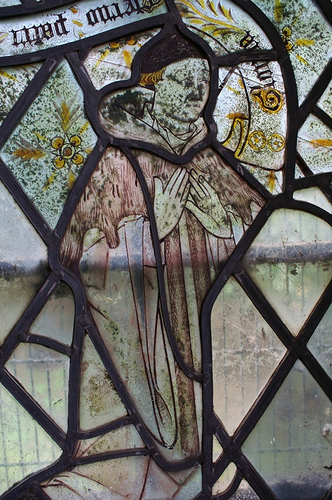 Newington, Oxfordshire, originally uploaded by Vitrearum.
This panel of glass is in the beautiful church of Newington in Oxfordshire. The glass dates from the early sixteenth century and was jointly the gift of Dr Stephen Barworth (died 1511) and Dr Richard Salter (died 1518), they were both fellows of All Souls College, Oxford and sucessively rectors of Newington. The image portrays one of them (we don't know which one) dressed in choir dress. He is wearing a pileus or doctor's bonnet on his head and you can see he has a very full surplice with long sleeves. Over the surplice he wears a fur garment which forms a cape over the shoulders, has a hood attached and two pendants that hang down at the front. This fur garment is the Almuce. The Almuce was a vestment of dignity worn by cathedral dignitaries and it seems also by those who had acquired a master's or doctoral degree from one of the universities. The type of fur used varied according to the rank of the wearer, grey squirrels' fur being reserved for canons and bishops. The almuce was still worn in some places during the Elizabethan period, but it gradually fell out of use to be replaced by the black silk tippet. In the Roman Catholic church it evolved, in most places in the mozetta or shoulder cape.

Here is another example, worn here by Master Thomas Butler (died 1494), who was rector of Great Haseley, Oxfordshire: 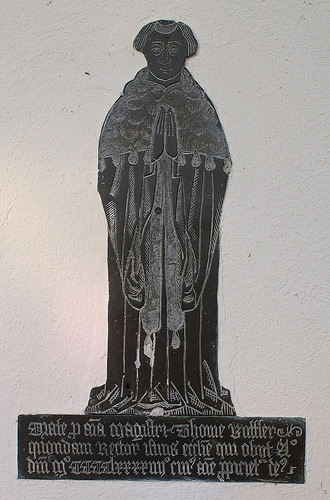 
- A Taste For The Macabre - Late Medieval Cadaver Tombs
Golafre monument at Fyfield in Berkshire In the fifteenth and early sixteenth century people had rather a taste for the macabre when it came to funeral monuments. From the 1440s onwards it was common for the higher clergy, gentry and merchants to erect...

- Fourteenth Century Wallpainting
South Newington, Oxfordshire, originally uploaded by Vitrearum.South Newington in north Oxfordshire has a superb array of medieval wallpaintings. There is a spectacular series in the north nave aisle dating from the early part of the fourteenth century...

- Palimpsest Wallpaintings
Combe, Oxfordshire, wallpaintings, originally uploaded by Vitrearum.A palimpsest is a work or art or manuscript that has been painted on on or written on, scraped off, and used again. The word palimpsest comes through Latin from the Greek words ?????...

- Elevation Squints In Screens
Church Hanborough, Oxfordshire, originally uploaded by Vitrearum.One of the things I sort of obsessively look for and photograph in churches are elevation squints. These little openings can often be seen cut into the dado of medieval screens and were...